The second webinar in our season of Expert Insights welcomed Sophie Josephson, Senior Child Rights Advisor and project leader of ECPAT Sweden's helpline, and Jonas Karlsson, a quantitative sociologist and researcher who discussed the impact that sharing non-consensual explicit content has on a child.

This session allowed the audience to gain better insight into the complex nature of non-consensual content and how young people and adults can collectively strengthen efforts to prevent the spread of this content. Jonas kicked off the session by sharing survey results from ECPAT Sweden’s 2021 report, “Everything that is not a yes is a no.” The survey targeted children between the ages of 10-17 years and focused on their exposure to sexual crimes and their protective strategies. (Access the report here.)

Why are children sharing nudes?

In the survey, children were asked to share their experiences sharing nudes. Based on free-text responses, the primary reasons were to explore their sexuality, have casual interactions, and build trust and a relationship with someone. In many cases, children found that it was multifaceted perceived sharing nudes as unproblematic and positive according to the survey responses. Jonas raised that most children surveyed are aware of the risks of sending nude images but do not mind taking them. As long as this content is shared consensually and trust and respect are upheld, young people view this as no issue.

The influence of social context

There are distinct rules and unspoken implications when discussing this material.

Assumed trust and mutual respect. These are the foundations for relationships relied upon in these circumstances. As soon as an image is shared without permission, there is a violation of trust.

Normalised behaviour. Most of the children surveyed reported that receiving nudes is a normal part of life and have learned to accept them. One child stated, “Sharing nude images have been more normalized, people view them as trophies and an object to brag about among other things.”

Preferential empathy. Children are creating their own rules and applying them in a unique manner. In one free-text response, a 17-year-old boy became angry after seeing nude images of his sister appear in a group chat. Although he and his friends commit the same abuse against other girls, the violation of his sister was deemed unacceptable to him.

Why are nudes sent without consent?

There are many reasons such as a change in the relationship or there could be the possibility of malicious intent such as public shaming or revenge or a form of bonding amongst friends. A 15-year-old girl said that her ex shared images of her amongst a group of friends because she had informed his parents that he was drinking alcohol.

What are the ramifications of non-consensual sharing?

There are many impacts on a child’s life that create long-term, ongoing abuse. The impact:

Are there effective practices for dealing with minors who blame themselves? What would you advise to tackle victim blaming?

Victims of trauma and exploitation commonly experience feelings of guilt, responsibility, and self-blame. ECPAT Sweden sees a lot of victim-blaming amongst children themselves and parents, teachers, police, and people close to the children who are presumed to be confidants. This was prevalent in many of the accounts and free-text responses. A 14-year-old boy stated, “you can put the blame on yourself even though the other person is to blame.” A 16-year-old girl also claimed that “it’s your fault if you send a nude, you need to think about the consequences.”

Additionally, utilising the appropriate terminology can help guide these conversations. Refrain from calling explicit content self-generated or risky because this implicitly places the blame on the child.

We must take victims seriously

There were a few examples where respondents were able to manage their vulnerability. A 15-year-old girl shared that "I thought it was super hard at first but now I look back on it as if he was just an insecure idiot.” A 17-year-old girl said, "I have become stronger and do not care if any immature boy would think that no one has ever seen a girl's body and feels that he must show everyone."

However, these incidents are of the rare minority. In most of these cases, the harm is irreparable and those around victims who are supposed to protect them are turning the blame on the victim. For example, a 16-year-old girl's content was circulated for four years despite her making several attempts to contact the police.

In the majority of cases, the harm is irreparable and the support, trust and authority from law enforcement, parents and guardians are lacking. There is a tendency that harm is a result of the consequences of image sharing, however, the reality is that the damage stems from the lack of reaction. (Access the Swedish version of the report here.)

What kind of prevention or awareness for children and adults would you recommend? 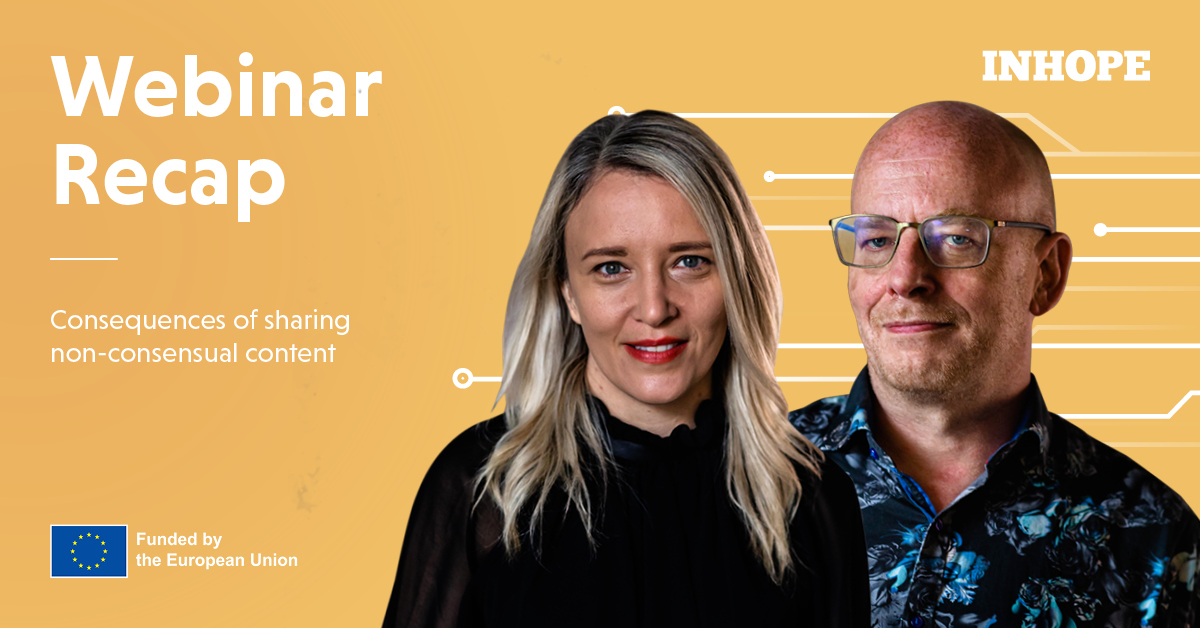 Children and adults should understand the fundamentals of what healthy, safe, and respectful relationships look like online and offline.